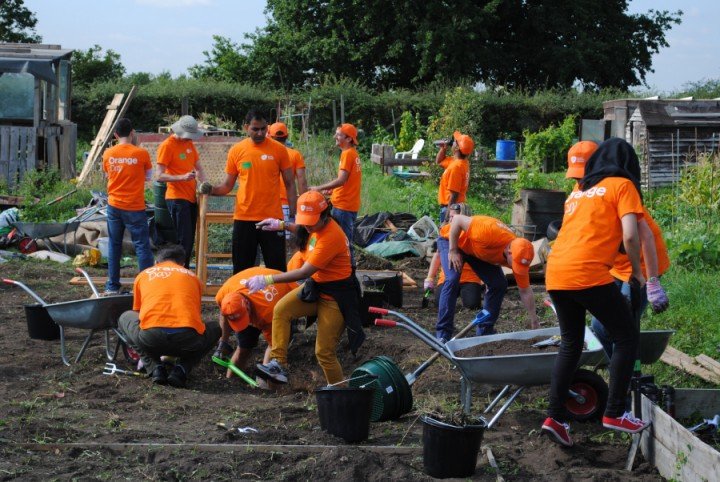 On Monday 7th September GSK staff came to the Hanworth Centre to take part in their annual Orange Day event. Orange Day – so called for the orange colour of GSK’s logo – is a GSK initiative to give back to local communities. Staff volunteer one day of their time to work on a project within the local community. This year a local charity, Hounslow Action for Youth (HAY) who run the Hanworth Centre, was chosen to benefit from GSK’s Orange Day programme. Planning for the day had started earlier in the year and the ideas of how GSK could help HAY were generated. Plans to refurbish parts of the Hanworth Centre and to transform the allotment were drawn up and agreed. GSK funded and planned the project and encouraged staff to sign up to take part. Jess Kaur, the founder of ‘Oshum Karam’ who volunteers at HAY and works at GSK, also partnered up with GSK to help prepare for the Orange Day.

Over 100 GSK staff turned up to take part in this year’s Orange Day, all helping to refurbish the Art Room, Youth Work Office, refresh the paintwork, clean the outside of the building, tidy up the outside area, replace the notice boards and provide new and additional storage at the Hanworth Centre. In addition to this, the team helped build a greenhouse and patio, raised beds, water butts, a chicken coop, seated area with sail, dug and laid a pond with fencing, which totally transformed HAY’s allotment. Quotes:

“The GSK team managed to implement what was a 5 year development plan for our allotment in a day!! This is a fantastic achievement, which the children and young people who attend HAY’s activities at the Hanworth Centre, will really benefit from. On behalf of HAY, I would like to say a ‘BIG THANK YOU’ to all of the GSK staff who took part in the Orange Day which has helped transform both the Hanworth Centre and our allotment”.
– Debbie Hughes, Director of HAY

We are proud to be part of International Women’s Day with the London Borough of Hounslow.Brilliant speakers, discussing important topics as well as HAY young women performing poetry from their new anthology “Monuments”. Join us for this exciting event! #IWD2021 #choosetochallenge pic.twitter.com/E9Tmt34ZEV